My journey to improved fitness started on 8/25/2007. That was the day I saw pictures of our family vacation. I could see that I was looking a lot like my Dad, around the middle. It was the final reason to get me going. My knees bothered me and I had borderline high blood pressure. My plan of action was to lose weight and start walking. During the winter I would run up and down stairs. I lost the weight I wanted to, my knees felt better, and my blood pressure came down. I thought I was doing a pretty good job and was in good shape.

In February, 2013 the DECC decided to promote fitness. I liked what I was doing and thought I had been successful. I really didn’t want to do something different. And, I was a little skeptical. But I decided to be a good employee. I supported our new wellness program. I attended the fitness classes. These are the classes conducted by Destination Fitness. The first year I attended more classes than anyone else. I remember in the early weeks I had sore muscles that I never had before. I realized that I was getting a better rounded program than what I was doing on my own. I also remember the early HIIT classes. Since I was the oldest person working out, I would invoke my “senior discount”. I would, often, sit out the last interval. I wasn’t in as good of shape as I thought I was. I continued to go to all the different classes offered by Destination Fitness.

At some point during the year I was able to do all the intervals.

Then in November, 2013 the DECC Wellness Committee decided to promote the use of the Bridge Club. On days that I didn’t have class, I started running on the treadmill. I was amazed. I was able to run a couple of miles. That was the first time I was able to run that kind of distance. By January 2014, I was up to 4 miles. Now I was wondering just how far I could run.

I’m not sure of the sequence or my thought process, but by February I was wondering about the Gary Bjorklund Half Marathon. And, anyone who knows me, knows that once I started thinking about it, I was going to do it. Something I had never thought about doing. Ever!

Now a new phase. Personal Training with Destination Fitness. Lots of work getting ready to run a half marathon. Plenty of running. Running up hills. Sprint work. Strength Training. That first “half” was supposed to be the last. You know, one and done. But there was another one. In 2015. And, there was going to be a third. Then I got a crazy idea that the “half” was going to be a full marathon. Sometime in late summer I decided to do a full marathon, and registered for Grandma’s 40th Marathon instead of the Gary Bjorklund Half Marathon. After that I decided to do the Whistlestop Marathon, as a trial run. With little time to train, I felt great running it and had a quick recovery afterward. I think I surprised my trainers from Destination Fitness. Mike says your first is usually a “flop”.  I don’t think they fully realized where they had taken me.

A couple of days after Grandma’s 40th Marathon I will turn 65. I never thought about running a marathon, ever! And, now I can’t wait to run my second one. I think it is fair to say, with Destination Fitness providing the map to fitness, my Journey to fitness has led me to the best shape of my life. I’m not on any medications. My BMI is 24. My cholesterol level is 156. My blood pressure is 113/69.  And, I can run 26 miles. Thank you Destination Fitness. 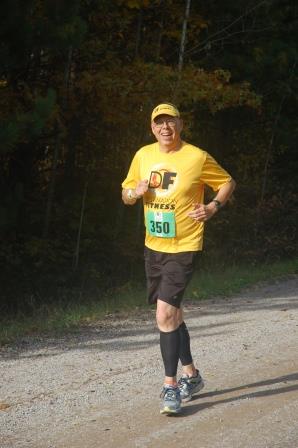